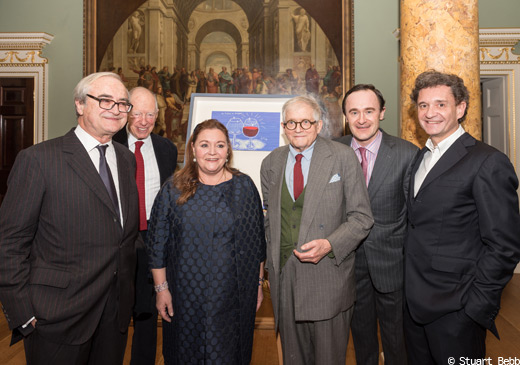 Julien de Beaumarchais de Rothschild and David Hockney together unveil the display case containing the original artwork for the label of Château Mouton Rothschild 2014, drawn by the artist. Luminous and vibrant, it shows two glasses, one empty and the other full, telling the story of feverish expectation and the constantly renewed miracle of the birth of a great wine.

As Julien de Beaumarchais de Rothschild said: “The story begins in 1945, when my grandfather, Philippe de Rothschild, asked the greatest artists of the day to create a design to grace the label of Mouton, his wine, which he also considered to be a work of art. An artwork implies an original, and his daughter Philippine, my mother, had another idea of genius: that of showing the whole world the original works by Miró, Chagall, Picasso, Francis Bacon and so many others, hitherto seen only as reproductions on the label of the vintage they had been asked to illustrate. Now it is for my brother Philippe, my sister Camille and myself to continue that marvellous adventure, that urgent and impassioned quest.”

Just as the most famous names in contemporary art are brought together in a collection to which a new work is added each year, so the Château motto, “Mouton ne change” (I, Mouton, do not change), is perpetuated even as each new vintage reveals unexpected treasures.

The 2014 label has a very special significance for, in his radiant and colourful celebration of Mouton Rothschild, David Hockney has also offered us a symbolic portrait of Baroness Philippine as her friends knew her, for so long the guiding spirit of the legendary First Growth.